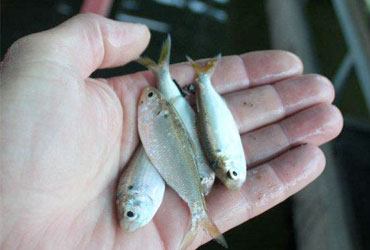 Bass anglers can lose focus after the fish leave the beds. Anglers knew what to do as the fish went through the prespawn and actual spawn, but 10 days later these same anglers can be confused, zipping from one spot to the next like water bugs. It’s this postspawn period, prior to the fish setting up on established summertime areas, that throws a monkey wrench into bass fishing.

There can be as many distractions to the fish as the fisherman, and the biggest is the shad and bluegill spawn. These feeding opportunities delay bass from setting up in their traditional summertime locations.

Baitfish spawns can save the day for anglers who locate and exploit them. Gizzard and threadfin shad, bluegills and other baitfish are vulnerable while spawning, not to mention producing a fresh batch of food. This presents a great opportunity for knowledgeable bass anglers. Here is the when, where and how for bass anglers looking to exploit the baitfish spawns.

Traditional Spawning Time: In Southern Reservoirs such as Beaver Lake, gizzard shad begin spawning in mid-April and continue through May. Most of the actual spawning occurs at night.

Spawning Locations: Gizzard shad can spawn just about anywhere on a lake, including weedy shallow backwaters. On the main lake, they like hard-bottom pockets with laydowns or riprap banks.

Look For: Excessive baitfish activity at the surface, blackbirds and other birds on the shoreline.

Bow-Chica-Bow-Wow: Adult male and female gizzard shad broadcast their eggs and sperm simultaneously near the surface usually during the wee hours of the morning. The fertilized eggs sink to the bottom and adhere to rocks, vegetation or wood cover.

Best Technique/Lure: Cast a single YUM Mud Minnow rigged on a 3/16-ounce YUMbrella Money Head jig, a Heddon Super Spook Jr. in shad patterns or a 3/8-ounce satin silver glimmer BOOYAH Blade. Baitfish color patterns are key during the gizzard shad spawn, especially in clear water. In water with any bit of stain, quite often the spinnerbait gets the nod as the most effective lure. During midday, a Flash Mob Jr. rigged with 3-inch Walleye Grubs fished in the deeper water near a spawning site is a good choice.

Reproduction Cycles: Threadfin shad can spawn several times per year. It’s not uncommon for threadfin to spawn a second time in mid July, and again in September or early October.

Spawning Locations: In lakes with a lot of vegetation, threadfin will spawn just about anywhere. Lacking sufficient vegetation, they spawn near boat docks, buck brush, rip rap and other hard objects.

Look For: Ripples from small schools of spawning threadfins moving erratically in the shallows, birds on the shoreline, and feeding fish breaking the surface.

Bow-Chica-Bow-Wow: According to a report by Texas State University, threadfin shad school along the shoreline, with small groups of 1-2 females and 3-15 males breaking away and moving toward the shore. These micro-schools move quickly toward a log, vegetation or other submerged object while releasing eggs and milt. Anglers can see these little spawning schools because they swim erratically near the surface.

Best Techniques/Lure: Pound the bank with a BOOYAH 3/8-ounce Super Shad spinnerbait, XCalibur Xcs100 crankbait or a Heddon Pop’n Image 5/16-ounce Threadfin shad pattern. The Super Shad spinnerbait features four willowleaf blades to mimic a school of small shad, but unlike a small castable umbrella rig, can be cast into shoreline vegetation and brought out without collecting weeds and slop. When keying in on either the gizzard or threadfin shad spawn, use a shiny chrome or realistic white baitfish pattern on all of your bass lures.

Spawning Time: Begins in mid-April and can continue all summer.

Reproduction Cycles: Bluegills can spawn up to five times a year in Southern states.

Spawning Locations: Bluegills and other sunfish prefer weedy protected bays with gravel or sandy bottoms. Nests normally are created in less than 4 feet of water.

Look For: Anglers should wear polarized sunglasses and look for the light-colored nests in shallow water. Another visual cue are the wakes made by bluegills as they prepare for actual spawning.

Bow-Chica-Bow-Wow: Males create circular nests in less than 4-feet of water and may cluster as many as 50 together in an area. As a female approaches the male circles her and makes grunting sounds. If she’s interested, the pair come to rest in the center of a nest and touch bellies to begin the process of releasing eggs and fertilizing them. This occurs several times before the male chases off the female. The male guards the eggs until the larvae hatch and swim away on their own.

Best Technique/Lure: Pitching a YUM Vibra King Tube (or bass jig) into the nest or casting a big topwater lure. Tubes or jigs should feature orange or red with a base of olive green to mimic bluegill colors. Any topwater you select should have an orange belly.

These are not the only baitfish spawns you're likely to encounter during a bass fishing career. Other spawns also can come into play, from widely varied species such as gar, crappie, carp and more. Two that bass anglers should pay close attention to are the skipjack and blueback herring.

Spawning Time: May to July in the Mississippi River and March to April in Florida and other Southern areas.

Reproduction Cycles: Once a year.

Best Techniques/Lure: Hollow-body swimbaits perfectly mimic skipjack and can be rigged singly on a jighead or on a castable umbrella rig. Cast upstream and reel the lure into gravel or sandy bottoms in the spawning area. Big topwater lures like the Heddon Chug’n Spook in baitfish color patterns also are effective.

Spawning Time: April to May.

Reproduction Cycles: Once a year.

Best Technique/Lure: The Flash Mob Jr. rigged with 4-inch Mud Minnows or curly tail grubs is a great pick if bluebacks are spawning in deeper, open water. If snags are an issue, the Booyah Mini Shad or other spinnerbait will create the “school of bait” look while remaining relatively weedless. Another productive technique is a big topwater like the Heddon Spook. Select white or chrome color patterns to best match the baitfish. 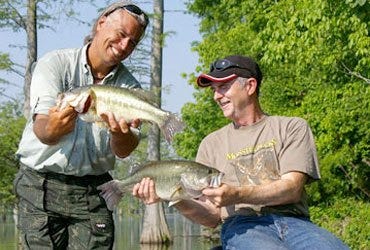