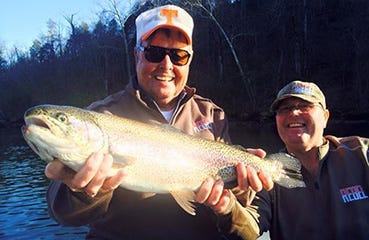 Tailwaters, the flows below dams, offer some of the highest quality trout fisheries in the nation. Decades ago, the Corps of Engineers, and the Tennessee Valley Authority closed dams on dozens of streams primarily for hydroelectric power and flood control. Another benefit, although not planned in all cases, was the development of fisheries based on the cold, clear, water flowing from the bottoms of these dams. Trout fishing opportunities blossomed.

The tailwaters below the White River chain of dams offer world-class trout fishing. Lake Taneycomo, which fishes more like a river, is below Table Rock Dam in Missouri and home to the 40-pound, 6-ounce state record brown trout. The White River below Bull Shoals Dam, in Arkansas, is one of the most well-known tailwater trout fisheries in the nation.

Arkansas is also home to the Little Red and Norfolk tailwater fisheries. Nearby Tennessee offers the Elk, Clinch, and Obey rivers. Kentucky has the Cumberland River. While Georgia is home to the Chattahaoochee. Oklahoma has the Lower Mountain Fork flowing out of Broken Bow Lake.

Each river is different with differing water flows and recreational usage. However, there are similar locations in each where you can consistently find and catch trout. Trout behave the same regardless of where they are located.

Cut banks are important areas to feeding trout during periods of high water. Previous flows have cut up under banks and rocks. During high water, trout move to these areas to escape the powerful current, as well as to feed on insects and minnows. Water coming through generators keep water clear, cold and well oxygenated.

Boat docks exist on many tailwater fisheries. Trout use them as current breaks, shade, and ambush points. All docks are not created equal, however. Docks in relatively shallow water, with nearby deep water, and steady current are worth seeking out first. More than 20 years ago, Huey Manley caught an Arkansas state record brown trout from McClellan’s Boat Dock, on the North Fork River. The behemoth weighed in at 33-pounds, 9-ounces.

Shoals and gravel bars shine when it comes to catching tailwater trout. Trout often hang below them to ambush prey as it drifts by. Too, deeper water usually exists off these bars, with pockets and holes where trout hide.

Feeder creeks become hotspots offering some of the best tailwater fishing action during prolonged periods of heavy water generation. Trout look for escape areas during these flows, and feeder creeks provide the perfect location. They remain good as long as the water from the feeder creek remains clear. A bonus each creek maintains its own food base, which washes downstream to awaiting trout during high flows.

The Rebel Tracdown Ghost Minnow was designed with tailwaters in mind and extensively tested on the White River chain. When targeting bigger trout or when the water is higher, jerkbait anglers will throw Smithwick Rogues in various configurations.

When shad are coming through the dams, guides on Taneycomo swear by Bomber Fat Free Fingerlings in Pearl White.

When the water is really flowing, legendary White River guide Donald Cranor will tie a White River rig to get the jerkbaits deep enough in the water column to keep catching fish. The rig is weighted with a 3/8-ounce bell sinker on a dropper line, and with that rig you can present a Rebel Minnow just off the bottom, where the fish are holding in the strong current. 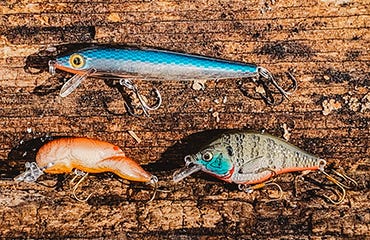 NEXT →
Do You Love Fishing? 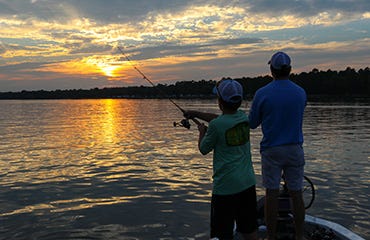