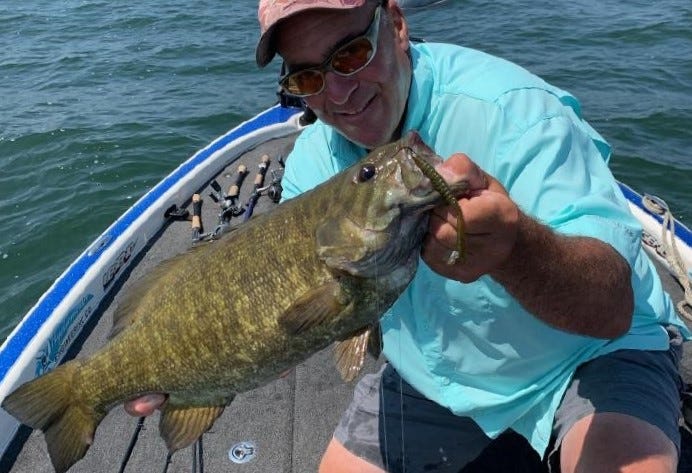 Scalish has sacked heavy limits of smallmouth from the famous Bass Islands in the U.S. waters of Erie’s western basin and from Pelee Island on the Canadian side of the lake. He has also duped countless smallmouth from rocky flats, drops and humps along Erie’s North Coast from Detroit, Mich., to Buffalo, N.Y. Heavy brown bass that thrive on rocky structures along much of Canada’s shore have also felt the sting of Scalish’s hooks.

As with any bass fishing, the first step to tangling with them is to find them. Where the bass hang out changes from season to season. With big-water smallmouth, they can be anywhere from the shallows during the spawn to deep offshore ledges and humps in summertime. Now that early summer is here, the bass are transitioning from their spawning grounds to their summer haunts.

“They’re probably still connected to big spawning flats,” Scalish said. “I use my electronics to find isolated sweet spots on the ends of the flats where they drop off. On Erie, I begin my search in 15 to 20 feet of water.”

The isolated sweet spots are bottom features formed by glaciers. They include cuts sliced into the bottom, fingers, rock piles and even sediment piles dumped by glaciers.

“All the bass structure on the Great Lakes was formed by glaciers,” Scalish stressed.

Although Scalish has caught big-water smallmouth on about every type of bass bait you can think of, finesse tactics produce far more bass for him than anything else. The Ned rig is one of his home run hitters. The heart of this bait is a mushroom style jig head with a small hook. Scalish has these jigs in black, green pumpkin and chartreuse colors and in 1/8- to 3/8-ounce sizes.

“I generally use heavier Ned jigs on the Great Lakes than on inland lakes,” Scalish said. “There’s a lot of wind and current to deal with on the Great Lakes and a heavier head gets down faster. I want the jig to be on the bottom where the smallmouth are rooting around the rocks.”

He dresses two jigs with a YUM Ned Dinger. One jig sports the full-size 3-inch Ned Dinger. The other jig gets a Dinger that has been cut down to 2 1/2 inches. The bass tell him which size they prefer on any given day.

“My Ned Dinger colors range from watermelon shades through green pumpkin to natural baitfish shades,” Scalish said. “I’m mostly representing gobies, crayfish, emerald shiners and alewives. There are also ciscoes and other baitfish the bass eat in the Great Lakes.”

Scalish casts the Ned rig over isolated rock piles and other likely smallmouth hangouts. After it touches down, he drags it slowly over the bottom. The challenge is to keep the jig ticking the rocks without hanging up. If snagging bottom is a problem, he switches to a lighter jig. He avoids hopping the jig off the bottom. A hopping presentation invites strikes from large freshwater drum, which are abundant on the Great Lakes and time-consuming to land.

A 7-foot, 4-inch, medium-heavy spinning rod matched with 10-pound braided line serves up Scalish’s Ned rigs. He ties on an 8-foot fluorocarbon leader, usually 10-pound test, with a strong, thin FG knot that slides through the guides without a hitch.

“I tie the leader to a micro swivel and add a 3-foot, 10-pound fluorocarbon leader to it,” Scalish said. “That helps to eliminate line twist. If you’re fishing super deep, the Ned rig spirals as it falls.”

Scalish’s other heavy hitter for big-water smallmouth is the drop shot, which he employs mainly for vertical presentations. When the bass are deeper than 15 feet on the Great Lakes they will generally tolerate a boat being directly over them, he has found. However, if the water is extremely clear, the bass will shy from the boat’s shadow.

With his bow graph set in the 2D mode, Scalish can see the bass beneath him. They are typically close to the bottom, but he has caught them suspended as high as 10 feet above the bottom. He lets his drop shot rig fall straight down to the fish. Thanks to today’s advanced electronics, he can see the weight and the bait on the display as they sink.

“I stop the bait about 2 feet above a smallmouth and watch the bass come up and eat it,” Scalish said. “It’s fascinating.”

The same spinning rod Scalish uses for the Ned rig serves up the drop shot. He ties the 10-pound braid to a micro swivel and knots a 10-pound fluorocarbon leader to the other end of the swivel. A 1/0 Gamakatsu Drop Shot hook hangs 2 feet below the swivel. If the bass are bedding, the drop line to a 3/8- or 1/2-ounce drop shot weight is only 6 inches in length. Other than that, Scalish goes with a long 2- to 3-foot drop line.

“When I see a bass close to the bottom, I let the weight touch down and shake the bait to tease the fish into biting,” Scalish said. “If that doesn’t work, I’ll drop the rod and let the bait slowly drift to the bottom. That’s deadly, especially when you rig the bait wacky style.”

YUM 3- and 4-inch Dingers, nose hooked or rigged wacky style, bamboozle more smallies for Scalish than any other baits. A nose-hooked 3.75-inch YUM Warning Shot, designed specifically for drop shot fishing, is next in line. He also picks off bass with YUM’s 5- and 6.5-inch Finesse Worms rigged wacky style.

As for colors, Scalish opts for a variety of shades, from transparent watermelon hues through green pumpkin and natural baitfish colors. Two of his favorites are Green Pumpkin Purple and Watermelon Candy.

YUM’S 5-inch Breaking Shad appeals to a bigger class of smallmouth, but you’ll get more bites with the other baits, Scalish added. 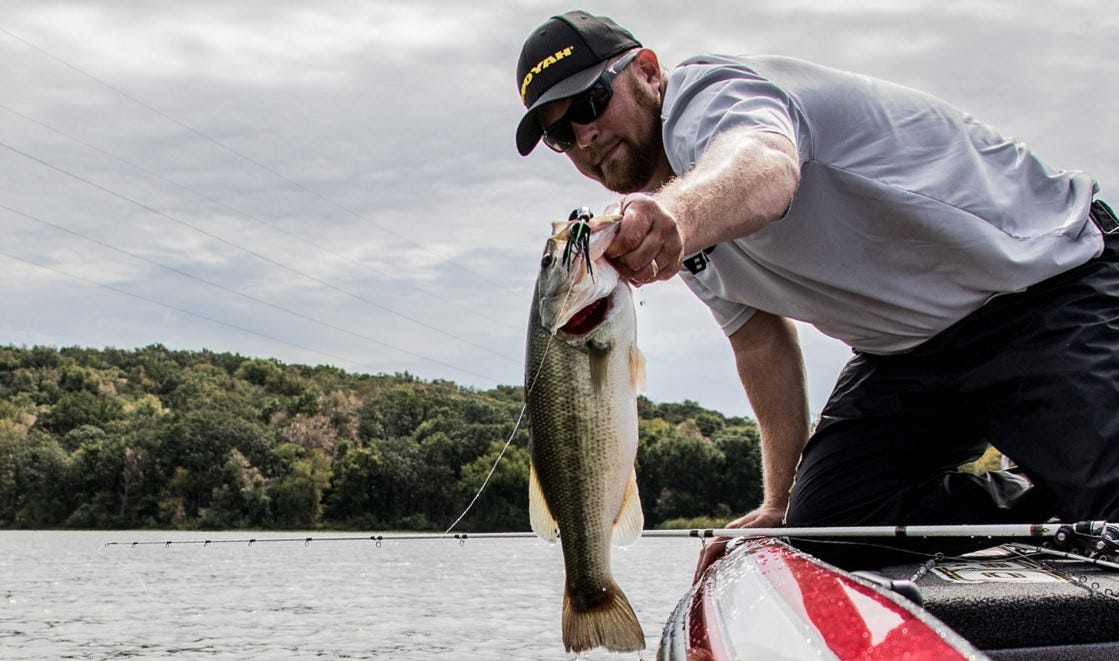 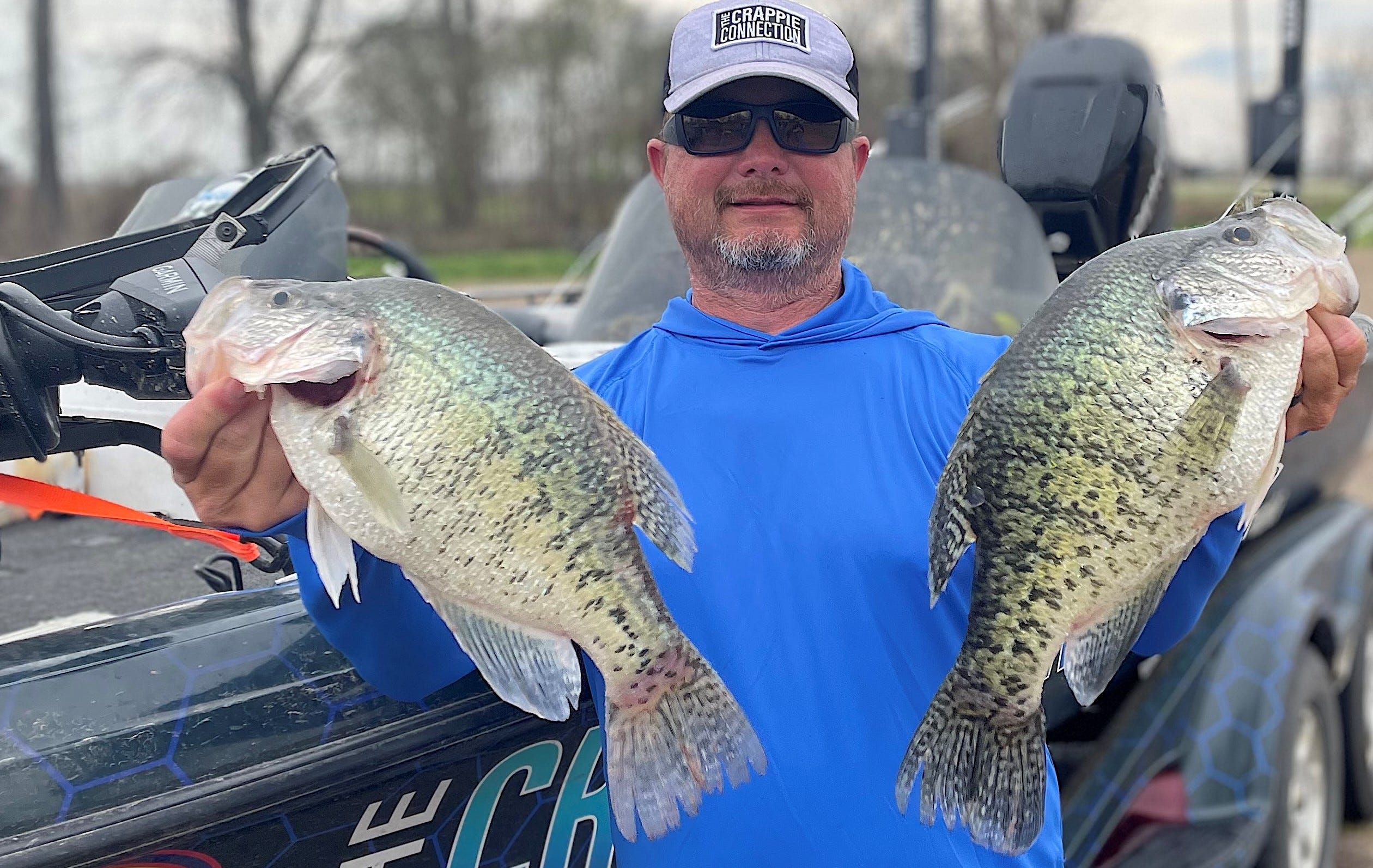