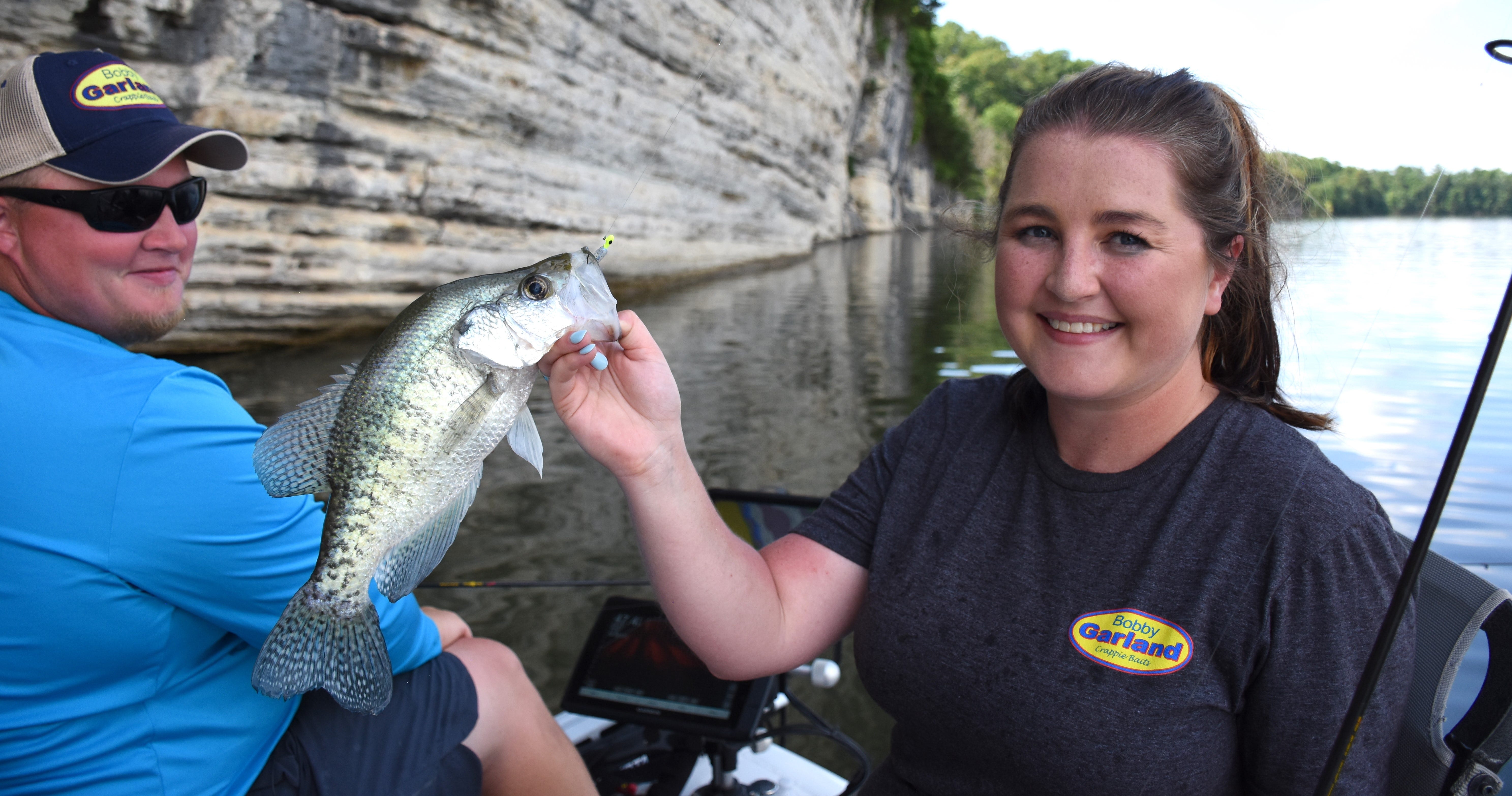 Successful summer crappie fishing begins with finding the fish. Learn how two top anglers use bluffs to their advantage.

When we want to escape the heat of summer, we move into the cool confines of our air-conditioned homes. When crappie on reservoirs want cooler conditions, the fish head for bluffs.

Bluffs on impoundments are often along river channels, so the structure offers access to cooler, deeper water. The rock walls also provide hours of shade, creating cooler zone that is ideal for summer crappie fishing

Asked about summer crappie fishing tips, Texas tournament competitor Jeff Schwieterman noted his belief that rapid depth changes attract crappie to bluffs. “Crappie can quickly go to shallow water for feeding and then get to the deeper water for comfort,” he said.

The cooler water along the bluffs makes it easier to catch shallow summer crappie, according to David Morrison, longtime Oklahoma crappie angler and brother-in-law of Major League Fishing pro Tommy Biffle. Morrison can usually catch crappie less than 10 feet deep along bluffs throughout the heat of summer on his home lake of Fort Gibson.

Bluffs are ideal summer vacation spots for crappie because the structure allows the fish to either move horizontally along the rock walls following baitfish, vertically shift up the bluff to feed and down the rock wall to reach a cooler comfort zone or stay put in a piece of cover. Sunny weather will cause bluff crappie to either move horizontally to find shade or vertically descend into the cooler depths of the structure.  Morrison notices crappie will remain shallows along bluffs on cloudy days.

Some anglers employ spider rigging tactics or troll crankbaits to catch summertime crappie suspended in the open water near bluffs. However, Schwieterman and Morrison prefer casting, pitching or dipping to target crappie that relate to wood cover or rocks along the bluffs.

Schwieterman favors bluffs littered with laydowns. “I am looking for those that have trees that have toppled over and are lying in various depths,” he said. “The bluffs that I like to fish are just sheer rock walls with trees with a quick depth change. So you could go from zero to 30 feet deep in a matter of 5 to 10 feet from the bank.”

The Texas pro suggests crappie will stay in the laydowns throughout the summer as long as baitfish are present and the weather remains stable. He has seen that a severe weather change or major rain event can cause crappie to abandon the laydowns. “Bluffs are more like river systems to me so when it rains there will be a lot of flow there and the fish will have to adjust,” he said.

The Garmin Panoptix LiveScope feature of his Schwieterman’s electronics allows him to see how many crappie are holding in the bluff laydowns. Once he finds a tree loaded with crappie Schwieterman moves within dipping range of the target. He uses 13-foot rods, so he usually keeps his boat 10 to 12 feet away from the tree and works the outer part of the laydown first. “As I go deeper into the tree I will move (the boat) in closer,” he said.

“Generally, in the summertime I use a smaller bait,” Schwieterman said, pointing toward a Bobby Garland Baby Shad as his normal lure choice for summertime bluff crappie. “If I am fishing just straight bluffs, I am going to do a double jig rig with two 1/8-ounce jigs. and if I am fishing cover like the trees and stuff I will just go to a single jig,” Schwieterman said. He favors a pink jighead and Bone White Chartreuse and Monkey Milk for the Baby Shad.

Schwieterman’s presentation of his Baby Shad depends on the mood of the fish. “If they are active fish, they are generally going to hit the jig on the fall,” he said. “If they are not active there are two things to do: One is you just get it to where that fish is at because if you are using your electronics, you just let it sit for about five seconds; Two, if they don’t react to it, then give a jiggle to it a few times and hold it there to see if they have gotten an interest in it. Once you got their attention, they are generally going to get it.”

Morrison favors bluffs featuring ledges scattered with logs rising off the bottom or manmade brush piles. “I like to go down the bluff with a locator and find structure underneath like logs that float up during high water,” he said. The ledges he keys on are usually less than 15 feet deep.

The side and down scan features of Morrison’s Lowrance electronics helps him find the underwater cover. After he finds the cover Morrison relies on the Lowrance Active Target live sonar to see crappie and know where to make his casts.  He positions his boat parallel to the bluff wall so he can work his lure along the ledge bottom at the same depth throughout his presentation.

The 2-inch Bobby Garland Slab Slay’R in the Lights Out (black and chartreuse) color is Morrison’s favorite lure for summertime bluff crappie. He favors a 1/8-ounce jighead for his Slab Slay’R because the heavier jig helps him keep the lure in constant contact with the bottom. “I mainly bounce it on the bottom,” Morrison said.

If the part of the cover closest to him produces fish but the bite stops, Morrison moves his boat closer to the wood and makes a vertical presentation to the fish.  He will drop his jig straight down into the cover all the way to the bottom and then slowly reel up his jig to trigger a bite.

When the heat is on, head for the bluffs and try Schwieterman’s and Morrison’s tactics for some hot summertime crappie action. 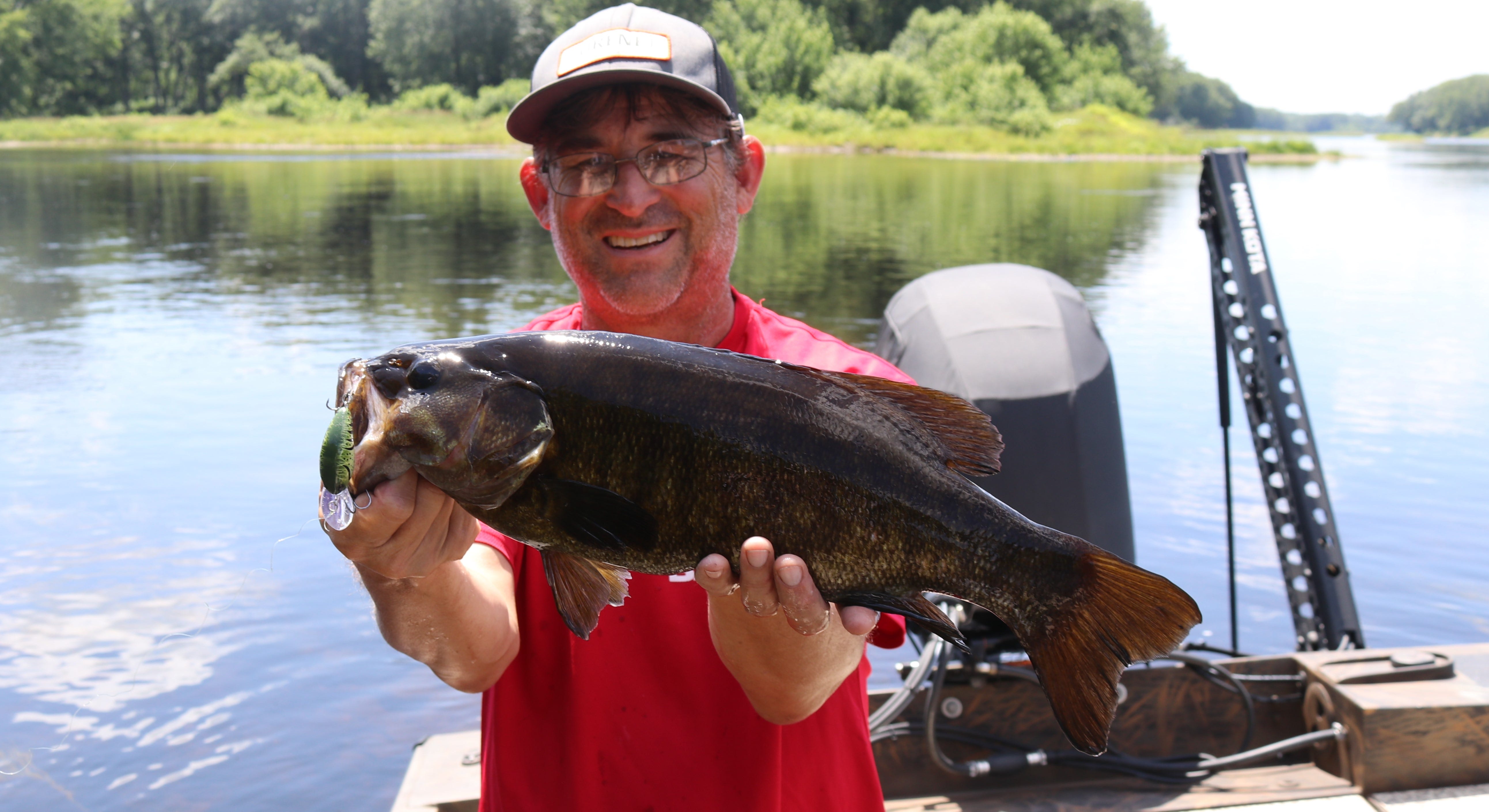