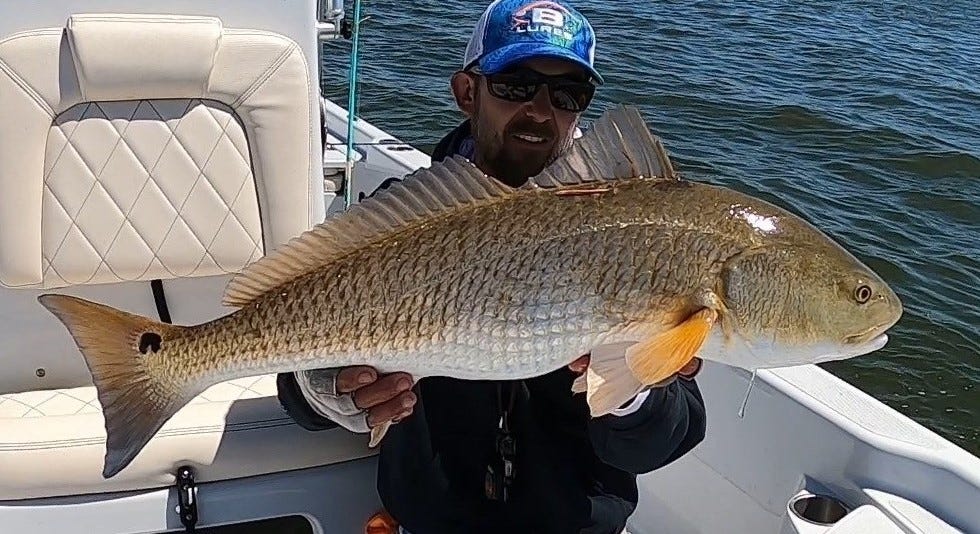 “People think I’m joking when I say I smell the redfish,” Capt. Patric Garmeson of Ugly Fishing said with a smile as he leaned back against the bull redfish on the end of his line.

Moments earlier, the veteran charter caption had announced “smelling them” and turned his head to look upwind. Something obviously looked good because he immediately turned the boat with his trolling motor, moved in the direction he had looked and made long cast with a swimbait. The hook-up was almost immediate!

Garmeson doesn’t literally smell redfish. However, he can smell clues that predator fish are feeding, so when Garmeson catches a whiff of that scent, he knows to seek its source.

Garmeson guides anglers year round, fishing all of Mobile Bay, waters upriver from the main bay and the Gulf of Mexico along the Alabama coast. He targets several inshore fishing species, among them redfish, speckled trout, flounder, sheepshead, jack crevalle and Spanish mackerel. Because of the vast area he covers and the variety of species and approaches – and because of ever-changing conditions – he cannot simply return to proven hotspots day after day and do the same things. Consistent saltwater fishing success depends on finding fish daily.

Fortunately, as a lifelong Mobile Bay angler and long-time charter captain, Garmeson excels at finding fish. He begins with a deep understanding of seasonal movements and behavior and likely effects of the day’s tides and wind forecast. That, along with recent history, typically frames a working plan. The magic comes on the water, though, from staying alert using his senses and compiling clues to find actively feeding fish.

Slicks, which are oily, slick-looking spots on the surface, come from oily baitfish and form when predator species attack. Slicks provide critical clues for inshore saltwater fishing. The number of slicks in a general area reveals the amount of feeding activity, and specific slicks that arise can lead to feeding fish or schools.

The slicks are what Garmeson smells when he “smells redfish” (or trout or other gamefish). Not surprisingly, it’s a faint but fishy smell. Looking upwind whenever he catches that familiar scent often allows him to see the slick and get a better read. If they are farther away of if wind is making slicks hard to discern, he’ll go searching with his electronics set to a side imaging mode.

It’s important to note that windbreaks cause slick areas between rippled surface area that look a lot like baitfish slicks and often fool anglers. Such areas are typically elongated and static, though. Baitfish slicks start out round and concentrated and then spread like ripples from a stone while drifting atop the water.

“You typically want to get upwind of where you see the slick because that is where the fish fed, but keep watching for more to form. That will help you see how the fish are moving.” Garmeson said.

“If you spot a slick as it forms, when it is, say, the size of a basketball, you know exactly where that fish is and want to get there quickly and make a cast if you can.”

Circling, diving seagulls sometimes reveal schooling gamefish. Most anglers know that to be true. Watching for signs from birds goes beyond that, though, so Garmeson pays careful attention to birds as he fishes, taking note of their type, abundance and behavior.

Large numbers of wading birds, such as egrets and herons, wading a the same flat and in a hunting posture, reveal that some sort of baitfish are congregated in the area. Other birds that provide clues about baitfish presence include pelicans, ibises and, of course, seagulls.

If you mostly see gulls and smaller wading birds, the baitfish are most likely small. If pelicans abound and are circling low to the water, larger forage fish like mullet are likely in the area and being pushed toward the surface at times. Wading birds also feed on crustaceans, so if you see birds moving stealthily, close to the water line, and looking down, look closer for crab holes, and watch carefully anytime a bird takes a stab at something. The birds (and the fish in that area) may be relating more to crabs or shrimp than baitfish.

The specific behavior of the birds also reveals a great deal about what is happening beneath the surface. If gulls abound in an area, you can be confident that baitfish are plentiful in that general area. If the birds are all resting, though, that might mean nothing has been feeding on the baitfish and pushing them to the surface.

Gulls cruising, circling and looking down suggest that feeding has been occurring, causing the baitfish to move to the top and become more vulnerable. That’s likely a good area to work and to watch for more clues. Gulls, circling tight, diving and squawking means something is feeding in that spot!

Garmeson remains ever on the lookout for baitfish and other forage species, such as crabs and shrimp. Seeing what kind of food is in any given area serves a couple of important functions. It reveals areas that are conducive to finding feeding gamefish and where catches are more likely. In addition, it points toward the sizes, types and colors of lures that are most likely to be effective.

Sometimes baitfish schools are visible simply by peering into the water, possibly only as a dark cloud or shimmery area. Often, they reveal themselves only when spooked, whether by a lure, the boat approaching or a gamefish attacking, and the only clue might be a little swell on the surface, a dark spot moving or extra ripples.

Occasionally, an overabundance of baitfish point toward an area to NOT waste too much time fishing. If finger mullet that are ideal forage size for redfish are extra plentiful on a flat and there is zero sign of feeding or the baitfish even being disturbed, chances are good that the fish are somewhere else or that the fish in that area are not in feeding mode.

Finally, Garmeson keeps an eye out for the gamefish themselves. Redfish push up swells when they cruise in shallow water, create poofs of mud or at times reveal themselves by “tailing.” Trout and mackerel often give themselves away with flashes beneath the surface. When cobia are around, they sometimes hang out just beneath the surface and are highly visible.

Gamefish of many kinds reveal themselves when they chase baitfish to the surface. Sometimes splashy feeding makes them obvious. Other times a baitfish skipping frantically across the top is the only clue that something bigger is nearby.

Garmeson also uses what he dubs his “eyes beneath the surface” to find fish. Side imaging capabilities on many modern sonar units makes it possible to look at areas and locate fish, even in very shallow water. When Garmeson is pursuing bull redfish in the Gulf, he seldom stops to fish until he has located a specific group of fish and knows which way his clients need to cast. These fish tend to stay on the move, so he does too, and he never stops looking for clues.

To learn more about fishing in Mobile Bay and trips with Capt. Patric Garmeson, visit uglyfishing.com.

Gear Up for Inshore Saltwater Fishing 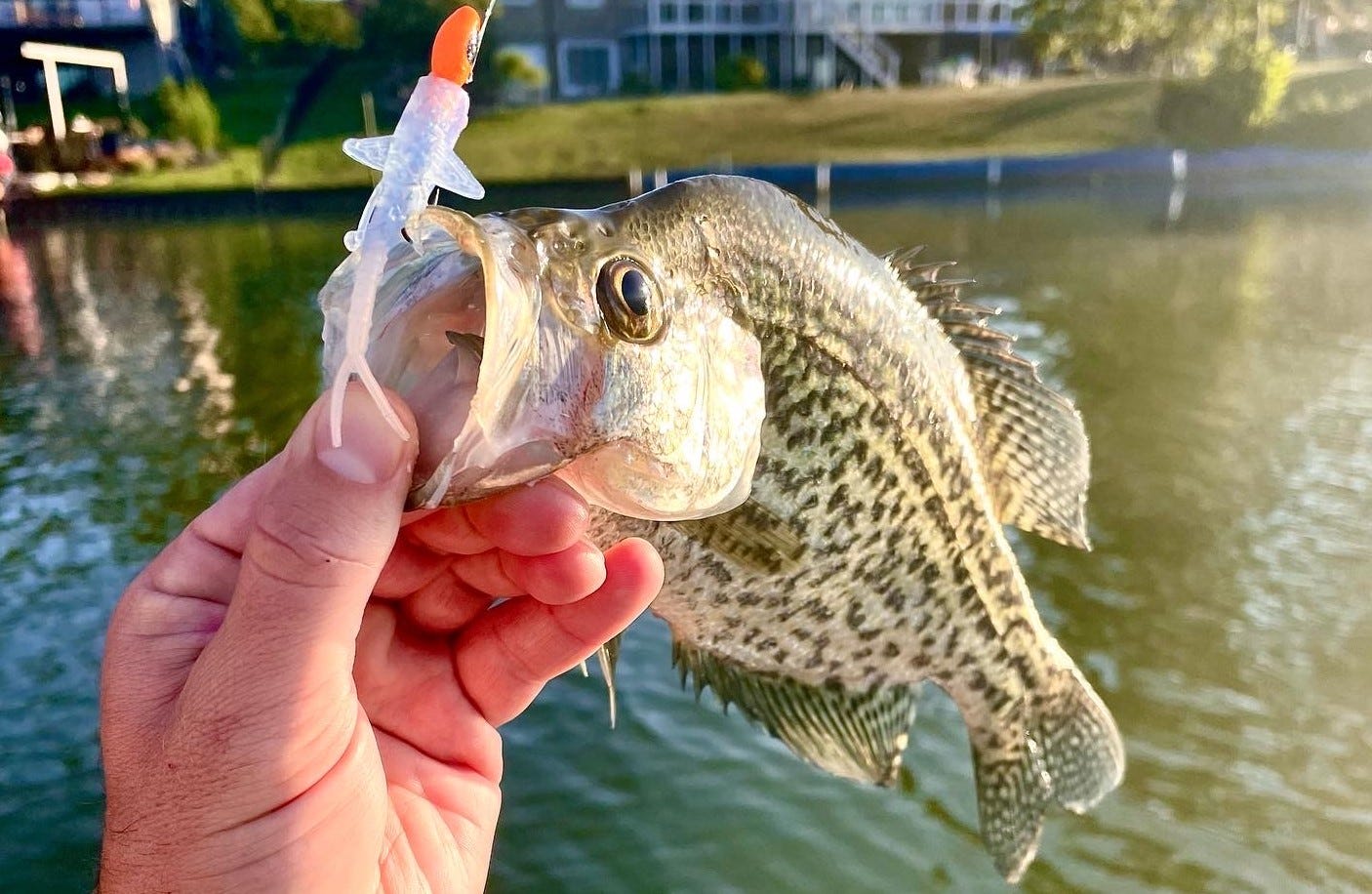