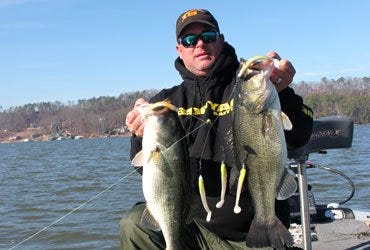 This fall B.A.S.S. announced that the organization was furthering its ban on the YUM YUMbrella, Flash Mob Jr. (FMJ) and other umbrella rigs.

Originally only banned from B.A.S.S. Elite events, the FLW Tour then followed, and in October it was announced that they are now banned from use during Bassmaster Opens and any other B.A.S.S. event that leads directly to a Classic qualification.

Name another lure that’s flat-out banned by bass tournaments. I’ll give you a minute to think.

While searching, let’s take a quick look at what’s allowed – things that don’t give the angler an unfair advantage over the fish.

Pros can see individual fish 360-degrees around the boat, often on screens bigger than my first television, and with better reception. They can manufacture and amplify the sounds of a bass-on-baitfish feeding frenzy to artificially stimulate violent devastation rivaling a scene in The Walking Dead.

Lures may house electronic chips that send out tiny charges, play a tune or shoot lasers out of their eyes. Finishes are applied to maximize ultraviolet properties, or to minimize them – whatever the marketing plan says.

Scents are researched and developed with the care of cancer drugs to take bass on a trip straight to the weigh-in stage. These piscatorial pushers get ‘em hooked. 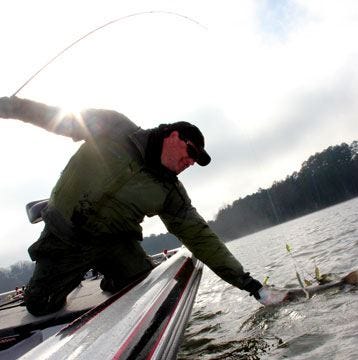 Yet, with all these technological, scientific, biological and superior progresses with the sole purpose of putting a hook into a bass’s face, only one lure was ever banned.
Only one. Why?

SO GOOD IT’S BANNED
“You can always find people throughout bass tournament history who supported bans on plastic worms, sonars…they didn’t get much traction,” said Ken Duke, Managing Editor of Fishing Tackle Retailer. “I can’t recall any situation like this with an artificial lure type (being banned).”

Duke is widely known as a walking bass tournament encyclopedia and can recite crazy stuff like what caught the third biggest bass at the 11th Classic. In the press room at every Bassmaster Classic for as long as I remember, all eyes went to Duke when a bass fishing question was raised, and he dutifully spit out facts that made your eyes roll.

Recently even the New York Times noticed this phenomenon, and published and article on Tuesday (12/2/14) titled “Lure Irresistible to Bass Spurs Backlash From Anglers.” (Anyone else surprised that an editor from this publication was clever enough about fishing to work in the word “Backlash?”)

In that article, B.A.S.S. spokesman David Precht says that the professional anglers feel that “sometimes it can be too effective and takes away some of the skill…” He made sure to make it clear that it was a vote of pro anglers that resulted in the ban.

There are pro anglers who support the tactic as a legitimate tactic, and those who believe it takes the skill out of catching fish. The YUM YUMbrella and Flash Mob Jr. likely had something to do with some of those feelings.

Prior to the ban in the Open tournaments, Georgia’s Patrick Bone became the only angler to qualify for the Bassmaster Classic by winning a tournament on the FMJ. It was the Southern Open April 4-6/2014 on Tennessee’s Douglas Lake where Bone beat 180 pros, most of whom were throwing one type of umbrella rig or another. 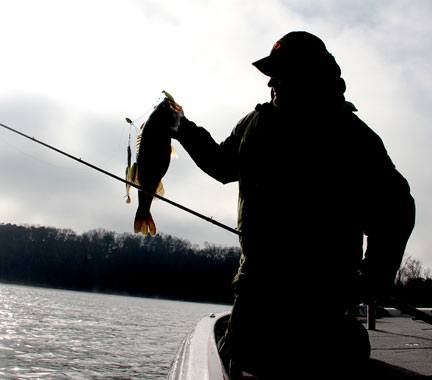 Still, a six-figure payday isn’t enough to change Christie’s mind. He’s still no fan of the technique. Even though YUM is one of his major sponsors, count him with the group who voted to ban it from top-level tournaments.

“But when everyone else is throwing it, you’d better be, too,” he said. “It’s the best umbrella rig on the market. I used the same one all four days and never broke a wire or anything.”

Umbrella rigs continue to be legal in most non-professional level tournaments, but always check rules, and know the state-enforced hook restrictions. In any Saturday’s boat dealership tournament in almost any water, an umbrella rig can be a player.

Take this into consideration. In a tournament on Lake Austin (Texas), Feb. 22, 2014, two brothers fishing Flash Mob Jrs won a tournament against 137 other teams, outpacing the second-place team by more than 14 pounds. In fact, the brothers put more than 20 pounds of bass in the boat on a single cast (two weighing more than 7-pounds and one over 6). You know what’s even cooler? They culled all three of those fish with bigger ones caught on the FMJ! (See “OMG FMJ Does It Again”)

Can you imagine, first of all, simply catching three big bass in one cast? Then, how about having such a day that you culled all three fish way to a limit weighing more than 40 pounds? I’m sure the satisfaction of winning the tournament comes in there somewhere, too, but two 7s and a 6 on one cast? Please.

Then there are the new lake records, that guy who caught 19 pounds with two bass on one cast, then did a similar feat the following year from nearly the same spot, the countless “personal best” bass and “personal best” days. There’s the fact that it’s the best way to catch white bass during the spring run. Walleyes eat it, and smallmouth are umbrella rig addicts, too.
Not to mention its roots in the striper-fishing world. These smaller castable umbrella rigs are pretty good on them, too.

“Bass are the most sought-after and widely distributed gamefish, and there’s a reason for that,” Duke said.

It’s because they’re a blast to catch. 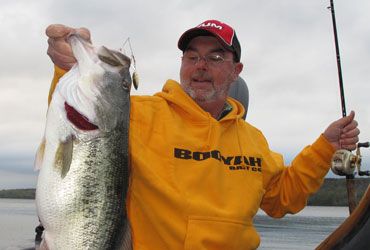 NEXT →
Inshore Anglers Better Have A Spook Ready Now 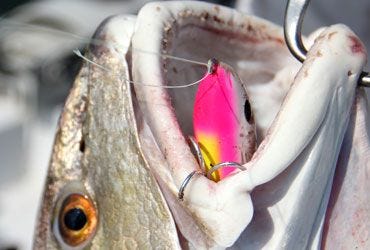